Team London Bridge and the LFA have revealed the teams and designs shortlisted in a design competition to improve wayfinding and the public realm outside London Bridge station.

The competition was open to architects, designers and artists, who were invited to produce design concepts for the transformation of a busy but unremarkable space on Tooley Street. Following the recently completed £1bn redevelopment of London Bridge Station, the project aims to create a lasting legacy for the area by improving the appearance of the streetscape and assisting wayfinding on routes to many major London landmarks. Thanks to Low Emissions Neighbourhood funding from the Mayor of London, the project also promotes clean air routes that people can easily choose to use over more polluted major routes.

The six shortlisted teams are:

CAN with Eddie Blake

“The Tooley Street Triangle site is an opportunity to knit back together some of the disparate elements of the area. The sketch proposal addresses Victorian arches, the 1960s concrete overpass, the hospital and the river, just out of sight. The design keeps the pavement clear for pedestrian flow, while offering rain protection and introducing a way-finding gesture at first storey. Using chain mail, the design allows daylight through while providing a visual clue to the route beyond. A large LED scrolling display is hidden behind the chain mail and revealed when lit up with messages welcoming people to the area, with a large digital clock giving a civic focus to the space. It is a piece of public realm infrastructure which aims to enhance ones ability and desire to walk through or even stop at this site.” 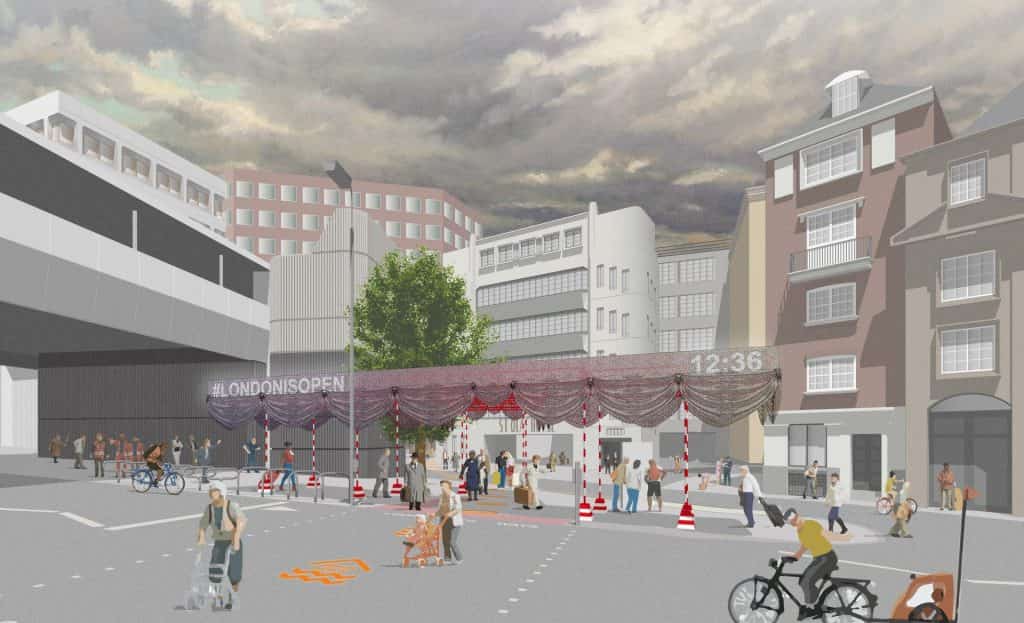 “Our initial proposal responds to the brief in two ways. Firstly, it responds to the idea of way-finding and orientation by proposing a scaled map of the immediate area on the ground plane. Secondly, we propose an object placed on the map that is part beacon and part street furniture. In this particular context the object responds to the triangular nature of the site but we have also conceived it as part of a family of objects that could be used on other sites.” 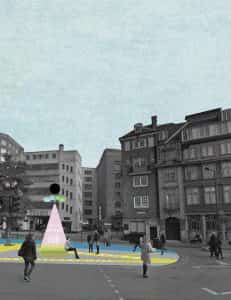 “Simply because we believe we can make Tooley Street a beautiful and meaningful place. We have three main ideas for Tooley street. First, to make it Memorable. Second, to make it Attractive. Third, to make it Social.” 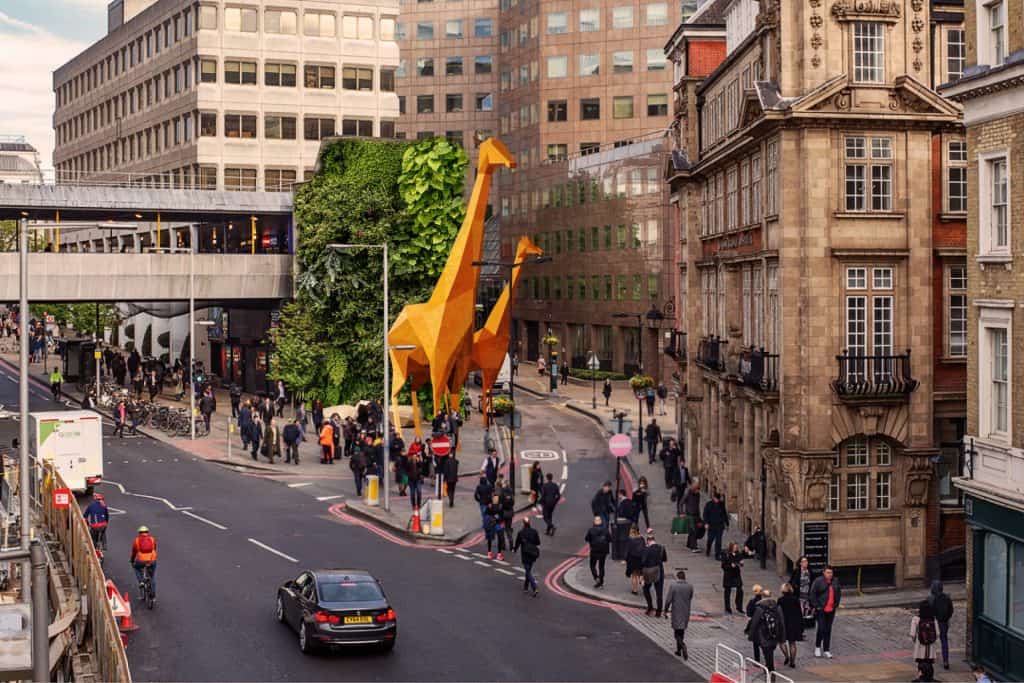 “Our proposition is to create a secular steel frame folly which people walk under or stop around as a way of directing people, as well as providing an opportunity to grow plants up the structure to improve air quality. The upper structure would be cut sheet or mesh steel depictions of the area’s landmarks that are agreed, prioritised and co-designed with local people and stakeholders using workshops and pop ups on site.” 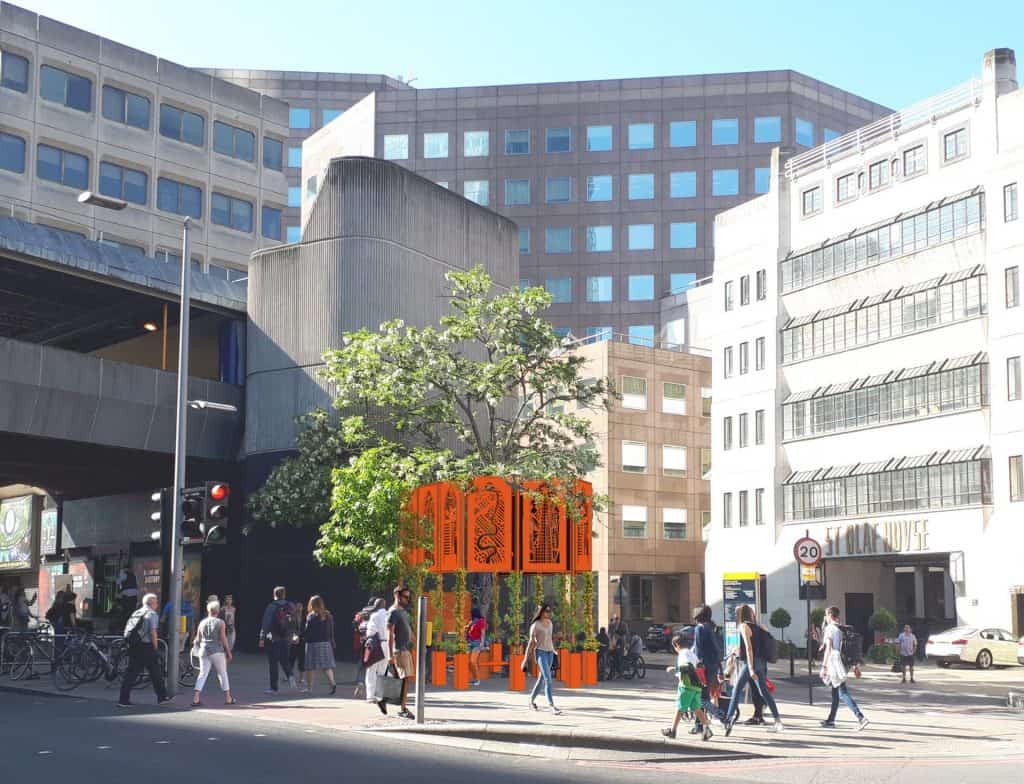 “Way More London is a proposal to enhance the understanding of the London Bridge area for lost commuters. The project is made of signage pointing to the main attractive places surrounding the area.  Beyond simply showing the way to reach the various places, the intention is to highlight a sense of place.” 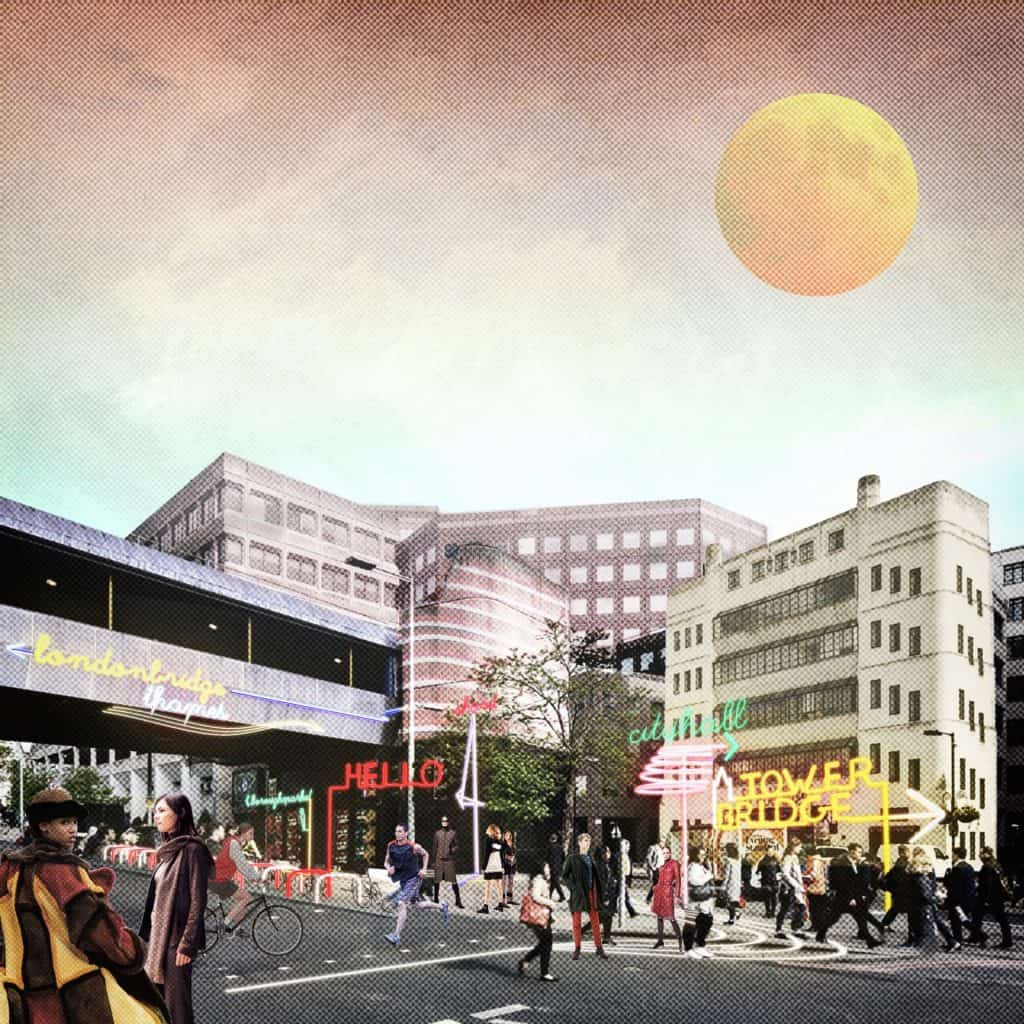 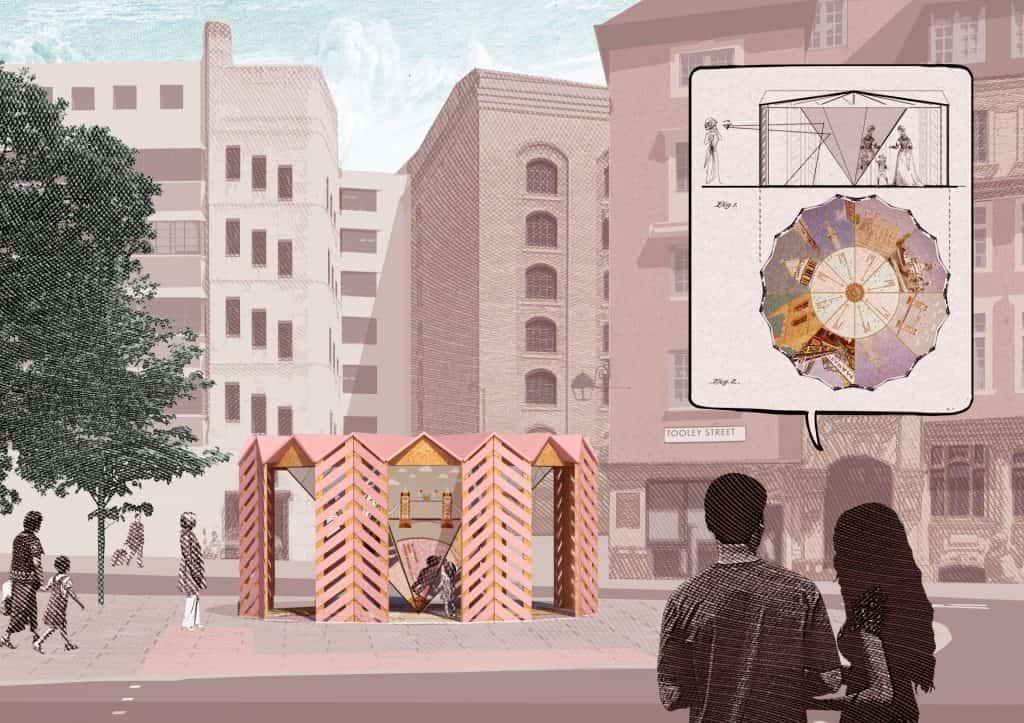 “The Zoetrope is a Georgian animation device reflecting the ceaseless motion of the modern city and its landmarks. From the street level and the bridge above the pavilion reveals the identity and diversity of London Bridge, day and night, through an intricate tiled floor reflected in sloping mirrored walls creating a sense of intrigue to passers by. During the approach the visitor views an image of the landmark directly ahead reflected from the floor. Within the pavilion more detailed instructions can be found on the walls and floor. Use of pictures and arrows make it easy use without needing to speak English.”

The winning team will be announced in July 2018 to develop a fully costed, feasible design that can be installed subject to planning consent. The total project budget is £23,000 + VAT.

The London Bridge public realm design competition is one of a series organised by the London Festival of Architecture and its partner network in 2018 to showcase architectural and design talent, and improve public spaces across London. Earlier this month the festival unveiled a series of bespoke public benches across the City of London and London Bridge, and is preparing to announce the winners of competitions to revitalise public space beneath the Thessaly Road Railway Bridge near New Covent Garden Market, and for a float to celebrate LGBT+ architects at the Pride in London parade on 7 July. July also sees the announcement of the winner of a competition to design a new pavilion at the Dulwich Picture Gallery to coincide with the London Festival of Architecture in 2019.

Tamsie Thomson, director of the London Festival of Architecture, said:

“One thing is for certain – the days of the Tooley Street triangle as one of London’s most boring public spaces are numbered. These exciting proposals showcase exceptional architecture and design talent, and offer a glimpse into how the area may be transformed to benefit the millions of people that pass through every year.”

“All other entrances to the new London Bridge Station have been dramatically redesigned in recent years, but this rather unloved public space has remained until now. We are thrilled that one of these striking designs will welcome tens of thousands of people to the area every week and help draw people to our stunning riverside.”

The London Festival of Architecture, City of London Corporation and Cheapside Business Alliance have announced the ten design teams selected…

As part of the London Festival of Architecture, Sir Robert McAlpine, Battersea Power Station Development Company and ScottWhitbyStudio are delighted…

Enter a search term or filter events by category